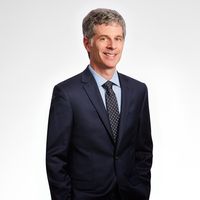 In an appeal of the Trademark Office’s refusal to register Mayweather Promotions’ trademark “PAST PRESENT FUTURE” for t-shirts, the Trademark Trial and Appeal Board (TTAB) last week affirmed the refusal reasoning that such slogan was as commonplace expression, which failed to function as a trademark because it did not serve any source-identifying function.  That is, it failed to perform the key function of a trademark, which is to “point out distinctively the origin of the goods to which it is attached.”

Next, Mayweather Promotions argued that PAST PRESENT FUTURE is not “merely informational” and is not a common phrase in the clothing industry.  On the issue of whether the mark was “merely informational” the TTAB deemed such argument irrelevant as the Trademark Office had not refused registration on the basis that the applied-for mark was “merely informational.”  Rather, the Trademark Office examining attorney had argued that widespread use of PAST PRESENT FUTURE in the marketplace “shows that consumers viewing the mark will perceive the applied-for mark as conveying that message rather than as indicating the source of the goods.”  On the issue of whether PAST PRESENT FUTURE is a common phrase, the TTAB was persuaded that the evidence of record provided by the Trademark Office demonstrated the ubiquitous use of the phrase in a non-trademark manner on t-shirts, “strongly support[ing] a finding that PAST PRESENT FUTURE is not perceived as a mark when used in connection with t-shirts.”

Mayweather Promotions offered a third line of argument, citing a dozen prior registrations for “sports-related slogans,” including Mayweather Promotions’ own registration for “PAST, PRESENT & FUTURE OF SPORTS & ENTERTAINMENT” for “online retail store services featuring sports apparel, clothing and hats” as providing precedent for registration of the applied-for mark.  The TTAB responded that such third party registrations are “irrelevant,” reminding Mayweather Promotions that not only were the cited third party registrations comprised of wording that is entirely different from the applied-for mark, but also that “prior decisions and actions of other trademark examining attorneys in registering other marks have little evidentiary value and are not binding upon the [Trademark Office] or the [TTAB].”

In a final “alternative” argument, Mayweather Promotions argued that PAST PRESENT FUTURE should be registered because it informs purchasers that the t-shirts are connected with Floyd Mayweather and Mayweather Promotions.  The TTAB deemed such argument inapplicable given that the mark was not refused on the basis of it being merely ornamental.

If Mayweather Promotions is thinking about a possible rematch down the road, it may want to consider limiting the channels of trade or classes of consumers in its application and securing a consumer survey that would evidence that PAST PRESENT FUTURE is, for the designated channels of trade or classes of consumers, viewed as a mark distinctively identifying Mayweather Promotions as its source.  Other applicants can also learn from this decision, and take away a reminder about the importance of providing adequate evidence if they hope to have at least a puncher’s chance at the TTAB.

Refusing to register Mayweather Promotions' applied for trademark PAST PRESENT FUTURE, the Trademark Office concluded: "Even if Applicant had provided evidence that a small subgroup of t-shirt consumers who are fans of Mr. Mayweather associate the phrase with him, Applicant fails to grapple with the evidence of third-party use of the phrase on t-shirts that does not appear to be linked with Mr. Mayweather, which suggests that the broader class of tshirt consumers would perceive only the common meaning of the phrase." 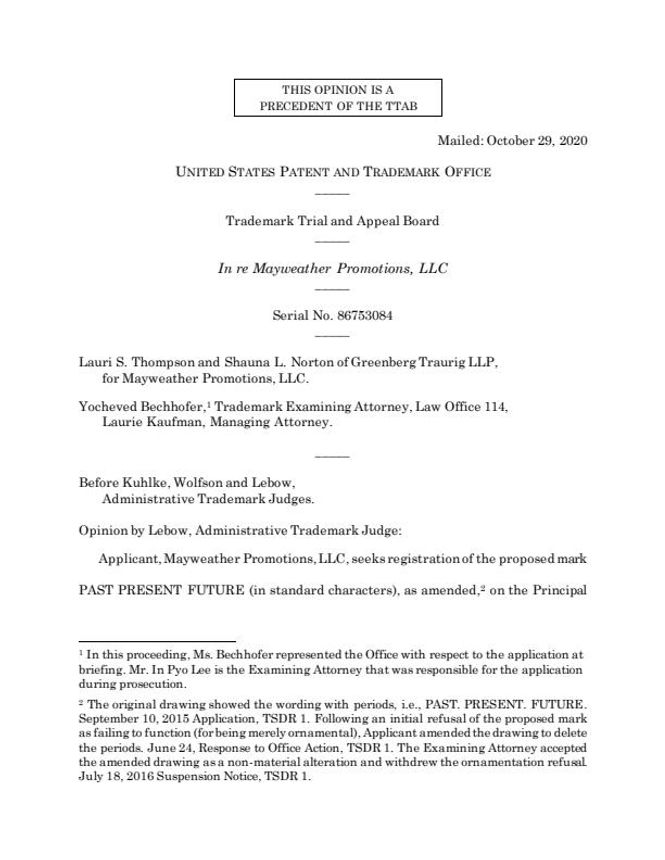 The announcement of election results prompted the expected chorus of brands messaging about "unity," but some opted to celebrate on social media.
Jeffrey Brown

Could Live Music, Festivals and Events Welcome Large Audiences Back in 2021? Ticketmaster has a Plan to Make it Happen.
Jeffrey Brown

Too good to be true? Beyond Meat is sued (twice) over allegedly bogus protein content claims.
Paul Benson
repost  cancel